Starting his career in a London Advertising Agency, Ron soon moved on to work freelance.  In the intervening years Ron has established an international reputation and respect for his ‘unique eye’ creativity and excellence. 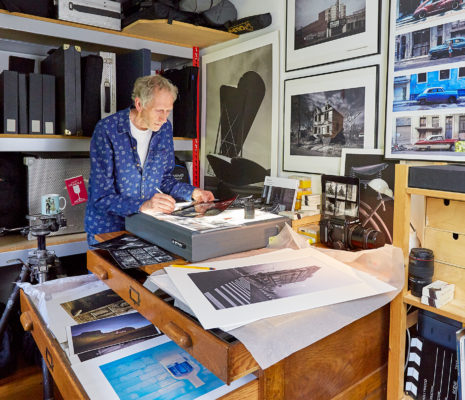 Published in many Graphis Photo books (by selection only) his other published books include: a ‘100 Years Of Brooklands’ published by Touchstone books, ‘Detroit Downtown & Abandoned’ a complete collection of his Detroit shots, exploring the abandoned areas and how they impacted on the city and the economic downturn. A two double-page spread of his Detroit work in the ‘International Masters of Photography’ (by selection only) published in California by World Wide Art Books.

More of his art projects can be seen and prints purchased at www.saatchiart.com/ronbambridge
In  ‘latest news and past events’ you will find not only shots from past and present projects but also many of the stories behind these images, with an insight into how Ron works, and how these both simple, and complex shots are captured.

Ron is a member of the Association of Photographers London.

‘GOLD’ non commissioned places in the 3rd Association of photographers Awards for a series of British Landscapes from Wales and the Lake District.

In The London Photographic Awards as follows:

Winner ‘Environmental Colour Award’ for his image, ‘Barbers Chair on a Singapore street’

Winner ‘Environmental Series Award’ for a set of shots from his personal project the Gold rush area of California.

Winner ‘Still Life Award’ for his images of delicate mushrooms shot on location in woodland and photographed on large format camera and film.

‘Environmental’ in the 2nd Association of Photographers awards image included of his New York taxi cab in the rain.

‘MERIT’ series people in the 5th Association of Photographers Awards for a series of five portraits of Irish farmers in southern Ireland.

‘MERIT’ interiors / exteriors in the 15th Association of Photographers Awards for another Californian ghost town image from the same series.

‘PERSONAL PORTRAIT SERIES’ in the 16th Association of Photographers Awards for his graphic portrait series ’Americans’ photographed in California.

‘Structure / Landscape’  category in the 18th Association of Photographers Awards for his commissioned image of a Merlin Mk1 military helicopter shot from 100ft above.

Inclusion in Design category of the 2007 Creative Review Photography Annual for series of four Black & white images from his BROOKLANDS Centenary book project.

One of Ron’s British Landscape image’s that received GOLD in the Association of photographers Awards chosen to be included in a special gala auction of original photography past and present at Christies London.

‘Capturing the Spirit of the Place’ in depth article about Ron and his landscape work published in the Photographer magazine.

Series of images from his California landscape project published in PhotoArt International.

Invited by The ‘Make A Wish Foundation’ to take part and submit portraiture for the book ‘Electric Dreams’ About how people interact with their favourite electric gadgets.

The book ‘Architecture’ Californian landscape photographs chosen for inclusion and published by Rotovision.

‘100 Years of Brooklands’ the birth place of British motorsport and aviation. A major book commission to photograph and document almost the entire famous historic pre war collection of aircraft, record breaking motorcars, and motorcycles.    The collection of photographs took over a year to complete, all produced in Black & White and brought together for the finished book published by Touchstone Books.

Documentary project photographing Detroit and how the economic downturn has affected the city.  Ron had a great interest in how these changes affected the cities architecture so undertook a trip to try and capture some of the things he saw. A self published book has been created with some of the images.

A two double-page spread of his Detroit work selected for inclusion in the ‘International Masters of Photography’ published in California by World Wide Art Books 2015.

Series of Landscape work included in the ‘British landscapes in danger’ exhibition at the Royal Festival Hall London. Produced by The Council For The Protection of Rural England.

Client’s Ron has worked with: